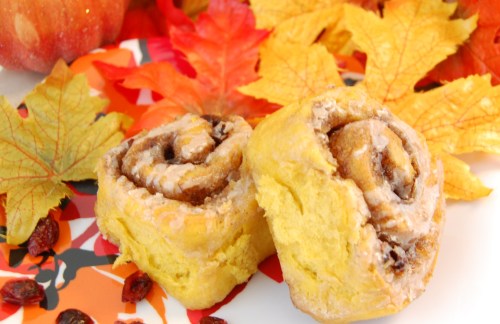 Is it a biscuit or is it a cinnamon roll? Oh wait, it’s both! I love this recipe and there are some days that I want my cinnamon roll and I want it now! So this recipe is great for when I have a craving, but don’t have the patience to wait for the yeast version to rise and rise and bake before I can sink my teeth into them. What is also great about this recipe is that it is a hybrid of a biscuit and a cinnamon roll, so you can beat two cravings with one treat!

*I used Soymilk because I like the way it curdles compared to other non-dairy milks. I also use Almond Milk with success in making vegan sour milk.

Preheat oven to 400 ͦ F and lightly grease a round baking pan (I use a pie plate). In a medium bowl, mix together the non-dairy milk and vinegar and set aside for a few minutes to curdle.

Mix together the ¾ cup of brown sugar, cinnamon, cardamom and cranberries in a small bowl.

In a large bowl, sift together the flours, baking powder, baking soda and sea salt.

In the bowl with the milk mixture, mix in the pumpkin puree, canola oil and the 2 teaspoons of brown sugar until well combined.

Pour the wet ingredients into the dry ingredients and stir together until just combined. With floured hands, knead the dough while still in the bowl until the dough is formed into a ball and no longer sticky on your hands. I added 1 tablespoon at a time until my dough was no longer sticking to my hands. Lightly flour your counter top and roll the dough out into a rectangle. Spread the margarine over the dough all the way to the edges. Sprinkle the brown sugar mixture over the top of the dough and start to roll the dough up from the longer side. Using a serrated knife or piece of string (I like to use sewing thread) cut the dough into 12 rolls and place in baking pan.

Bake at 400 ͦ F for 15 to 18 minutes. While the biscuit rolls are baking, mix together the powdered sugar, cinnamon, vanilla and coconut creamer. When the rolls are done baking drizzle the glaze over them while they are still hot. Enjoy!